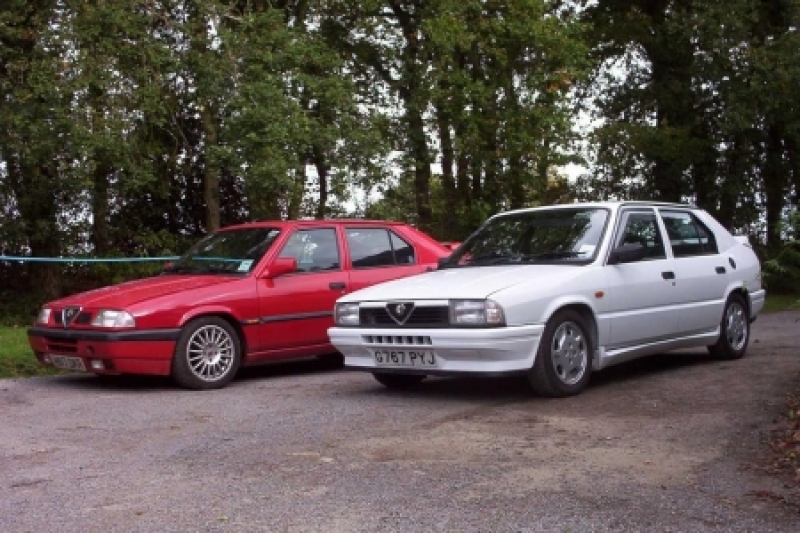 The Alfa Romeo 33 (Type 905 and 907) is a small family hatch-back car produced by Alfa Romeo between 1983 and 1995. It was based on the same floorplan as the Alfasud which it replaced. By the time production ended, almost 1 million Alfa 33s had been buit – the highest number of units of any Alfa Romeo car.

The AROC 33 Register is dedicated to the sharing of historical and technical information related to the model and individual examples owned by enthusiasts.

For technical or general help from the registrar and other AROC members, please visit the 33 area of the AROC Forum: AROC 33 Forum.

The 33 was very important to Alfa Romeo. Between 1983 and 1995 nearly 1 million of these cars were sold around the world. That’s a lot of cars. Many people berate the 33 as a backward step from the Sud, but actually the 33 was an improvement in many ways. Yes, the braking system was less innovative. Alfa Romeo stated that their reason for returning to the conventional disc and drum set-up was because there had been many instances of oil contamination on the Sud’s inboard discs causing brake failure. Servicing would also be easier and the handbrake more reliable. Alfa Romeo stated that the 33’s body was lighter and yet stronger than the Sud’s. The 33’s real ace in the deck, though, was its much lower drag coefficient of 0.36, which meant it could accelerate more quickly and with exactly the same engine as the Sud could reach 90mph four seconds quicker. This also created better fuel economy. At the time the only production cars with an equivalent coefficient were the much bigger Ford Sierra and Audi 100. The 33 also had more interior room than the Sud along with quieter and more comfortable ride.

The first 33s introduced in 1983 were a little lacklustre and rather basic. The standard cars had stated kerb weights less than 900kg, with no anti-roll bar, no central locking and rode on steel wheels with little Frisbee sized hubcaps and 165mm width tyres. In the UK there was a choice of two single carburetor engines:  the 1,351cc motor, which produced 79 bhp at 6,000 rpm and the 1490cc motor, which produced 85 bhp at 5,800 rpm. These two models were augmented by the Gold Cloverleaf, which was the deluxe model. It had the larger engine and was equipped with an electronic check system, headlamp washers/wipers, central locking and a wooden steering wheel.

In 1984 the Green Cloverleaf version was introduced using the twin carb 1.5 motor that produced 105 bhp at 6,000 rpm. With uprated gearing, stiffer springs, ‘telephone dial’alloys with 185mm width tyres, central locking, a leather steering wheel, a rear wiper, headlamp washers and a colour coded bodykit this was a sporty model much nearer to people’s expectations of Alfa Romeo.

An estate called the ‘Giardinetta’ was also added to the range. This had a basic 4 wheel drive system and was powered by the 95hp 1490cc unit. It had different struts and also heavier duty springs and sat on alloy wheels with 175mm tyres.

The cars came with a 3-year warranty and a 6-year anti-corrosion guarantee.

There was also a turbo version supplied by Terry Drury’s tuning company, which was sanctioned by Alfa Romeo with a claimed a 130mph top speed and 0-60mph in 8.4 seconds.

Series two 33s started appearing in the UK in 1987. They had clear indicators instead of orange and did away with the movable dials binnacle above the steering column, replacing with a more sedate interior.  Central locking now came as standard.

The 1.5 TI used the 105hp motor and tended to be shod on steel wheels with 175mm tyres. It was also equipped with the Alfa control warning system like the previous Gold Cloverleaf, (which was equally likely to be at fault as the items that it was checking) and there was no rear wiper.

The Series 2 Green Cloverleaf now had a 1712cc motor with hydraulic tappets producing about 118bhp at 6,000rpm. The gearing had also been improved, at last moving away from a very short first gear and ventilated discs were introduced. It came with plain alloys on 185mm tyres as standard and had more advanced front seats than the TI.

The Giardinetta was replaced with a 2wd estate, now named the Sportwagon, which used the 1.7 motor.

All three could be bought as Veloce versions with a deeper colour-coded Zender body kit and there was an option of 5-spoked alloys for all models.

The ‘Amica’ was a colour-coded TI.

Some Veloce models in the UK were later fitted with a new body kit that was even deeper than the bolt-on Zender kit and became very popular.

In 1990 a new face-lifted 33 was offered to the public with a redesigned stronger galvanized body. These are generally termed as series 3 cars, but in some circles they were referred to, rather confusingly as Mk2 33s. In the UK these were all fuel injected and had power assisted steering. The rear suspension was also revised. The 8v models in 1.5 or 1.7 form were simply called IEs and using Bosch Jetronic injection produced 103 bhp at 6,000 rpm and 109 bhp at 5,800 rpm respectively. The flagship of the range was the new 16v Green Cloverleaf version with a 1.7 motor that used Bosch Motronic ML4.1 injection to push out 137 bhp at 6,500 rpm. This gave the highest power to weight ratio of any production ‘4-pot’ car that Alfa Romeo had ever made. Something that has only recently, some 20 years later, been bettered.

Only the 16v versions had ventilated discs and leather steering wheels, though the standard IEs continued to use a new version of the ‘Alfa-Control’ warning system. The 16v car also had colour-coded mirrors unlike the standard IEs. Both 1.7 models had foglights as standard, whilst the 1.5 still had no rear wiper.

There was also a Permanent 4 model, which was created to stop torque-steer. Unlike the previous 4wd 33s, it had a viscous coupling and a separate ECU to look after the four-wheel-drive system, so that it could be used all of the time in all conditions. It also introduced Recaro seats and new exclusive alloys. 16v and Permanent 4 33s in the highest spec were given an S (for Sport) after the badge.

The Sportwagon continued in series 3 form with a choice of 8v or 16v fuel injected engines.

Cosmetic changes to the standard 8v 1.5 and 1.7 IEs created the Sportiva and Turismo respectively, the former with its own exclusive alloys.

Catalytic converters were introduced from 1993 with all cars now using Bosch Motronic injection, improving emissions for a slight decrease in power. The 8v 1.7 produced 107bhp at 5800rpm and the 16v produced 132bhp at 6500rpm. The 8v 1.7 IE also introduced rear seat head restraints at this time, though alloys were still only an option. On the 16v, Recaro seats were now standard as was a sunroof.

The Recaro seats now used the suede grey alacantara style and the fascia was slightly changed with oblong rather than square switches. In addition the 16v models had new 3-bolt front struts, which at last did away with the problematic plastic spring pan bearings.

The last of the IEs had distributorless ignition.

The Giardinetta had the same gearing as the 1.5 105bhp S1 Green Cloverleaf/S2 TI

There were many other variants of 33s introduced on the continent, which never made it to the UK, except through private imports. These included a 3 cylinder diesel model, cars with climate control, series 3 cars fitted with carburetors, ABS fitted cars and variations on the 4-wheel-drive theme.

Here are some official figures (with magazine test figures)

The hydraulic tappet engines can be a little less smooth than the sprung engines, but do have more power. The sportwagons and 4wd versions tend to be a little more tail-happy. The 16v engines need to be revved to get the most out of them whereas the 8v engines are more versatile. The series 3 cars with power steering and fuel injection feel a tiny bit less instantaneous, but do feel slightly more sure-footed. The late series 3s are the least raw/most refined of them all.

So how many 33s are left in the UK now? As of writing this (2015), the ‘How Many Left’ website considers there to be 260 left with 40 taxed. My figures are slightly more accurate and weighing up the discrepancies there are at least 311 on record with the DVLA, though 4 of these have been exported leaving 307. I have the registrations of 295 of these. There will also be a number of 33s not on DVLA record, but then again many of the recorded cars may well have been unofficially scrapped or in no better condition.

To the best of my knowledge: